PPA Salutes the martyr of the Country:- 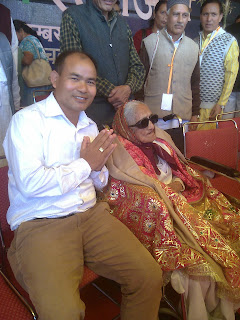 My rare previlage to welcome the mother of  Late Leut.General Jaswant Singh Rawat promoted posthumously after becoming martyre in 1962 war who  fought with the Chinese in the 1962 war till the last bullet.It is said he was helped by a local Monpa Girl of Arunachal pradesh called Sella.And in there memory the famous Sela Pass in the Tawang is named after a National Highway part in between Bomdilla and Tawang.

It is said the Chinese Brigade which attacked Tawang also respect him and hope the Govt. have already asked back his belonging if any with them.For a martyr like him;the Ramdhari Singh Dhinkar`s Hindi Poem comes automatically:-

The theme of the poem is :-
The flowers don`t want to be made as beautiful garland
The flower don`t want her be made to attract her lover
The flower ask the gardener to pluck it,then
The flower ask itself to be thrown in that road
Where many martyrs are going  to sacrifice for motherland
Will trample that flower.The flower prefer that end.

The PPA Salute that flower Late Leut.General Jaswant Singh Rawatji may his soul rest in peace .And his family always be happy may there families sacrifice continue to inspire us all.For they are the one which all the politicians also need to bow down in respect .As he burnt to give us light.
Posted by Togo Basar at 2:45 PM