THE CHARITY IS THE ONLY WAY FOR YOUR SUCCESS

The place where there is worst corruption and place where hardly media reaches this is the place where the Gods mercy and glory also work most . Like in my hometown Basar of west siang Dist. Arunachal Pradesh India.Where I am staying in the kadi Village P.o/p.s- Basar .I am personal witness to see Holy spirits miracle  glory and wonder in my Emmanuel Church Kadi village by the Lord and saviour christ- who made lame to walk , deaf to hear blind to see etc . Need not to say why the Americans are so clever to invest in the right persons and missionary Institutions working in challenging places ; as they get dividend in reply , as only after helping someone in Poor and destitute place one fill accomplished  . As the prayer support of the Poor and the destitute are most powerful and  one get real benefit .
The doubt caste on the Christian praying in the Church are things of the past now . Today every one are accepting  that the Christians are associating with everything good and those who want real answer of the God are also giving us their  helping hand .The notion that the Christians are getting foreign help should have been gone long time back , as new facts are revealing that in state like Arunachal pradesh only Institutions like  Ramkrishna Mission institutes , Buddhists Institutions etc. who were getting more benefits and Christians and Gangis are deprived their due  rights   from the State Govt.contrary to the popular beliefs .And also the Govt. is severally monitering the Charitable trust of Christian thus the interested persons  who are really convinced by my work and appreciate the  miracle of Lord  in my life with same articcle written in this blog.should thus send any help as gift in below mentioned account.
And even if the foreign money comes and is used for a good cause what is the harm ? Isn't our own money not rotting in Swiss bank ? Lord  saved me some20 yrs back in an operation theatre and I can be still be subjected to it if I am a fake. So exceptionally  rich brothers are expected to part with some of their richness which may make them stuborn and prideful ; making them far away from God's graceness . As  others may not even get second chance like me ,as in my case I had a narrow  escape  from death.See friends moment our breadth is taken our property is meaningless. So together we can make our life and world a better place as we have been gifted with something or other and this are golden moments for  doing good Samaritan work as life will last for only sometimes , before we have to face God's judgement .  Thus coordinated result oriented approach for Glory of God is most advisable .

And also the fact that the Christians have played a major role in propagating Nationalism in  by desciplining the Citizens in that line can be historically proved  , it is pertinent to mention that even the congress party was started by A.o. Hume who was a christian . The propagation of self discipline which is necessary for growth of healthy nation can only come by obedience to God , the committed missioneries should  make Christian  a good religion worthy to be appreciated even by those hardliners like RSS and VHP;and should not become name shake Christians irritating to society. The Hindu hardliner should be  in fact God fearing Peoples , but earlier  we lacked interaction to  know others point of view  in true sense of term . The Gods kingdom belong to those who sympathise with the Poor , destitutes and  minorities also .
So Hindu friends can also benefit by being kind to Christians as both are always in search for the higher spiritual growth ; their fore they should understand this that God alone is the master and when there is an open healing of ill and sick  in Christian sponsored Healing crusade and convention than there is definitely something in it . And healing of the Nation can also come if first there is love for the God . In this context my article – ` Something Above nationalism can be also read.`And who is God? article  written recently.

Therefore there is no reason that God will not answer our prayer for all the peoples by our  GBCC -  of which I am an adviser  . Even my   Holy Church is called Emmanuel Baptist church which means God be with us . Therefore I on behalf of all the Church Member appeal you all to give us helping hand . As it is privilege to help for the glory of the Living Gods kingdom when there is time .The giving is for the believer himself as God bless the cheerful giver . As even 1/10 of everything  is said to be accepted to be given to God of ones talent in a particular field and time which I  also honestly try . Honestly I am also not a righteous man myself but at least I always try to be obedient to Lord. But God have overlook my minor deficiency and always blessed me also . So I want you to try this living God and result oriented relegion . Please don't wait for bad time to come and help us as it is case of social justice also.As the Christians are very poor here in this part of the world.

To see the difference try Lord and savior Jesus Christ by being a sponsor of this programme and see what the living God can do for you ? We are failing short of money to accomplish this project . The names of the contributors will be reflected in my blog , and even the audit report of the total money collected will be published . The highest donator will be invited in the ceremony and those who don't want their name to be published can also contact me in +91-9436229344 , the rest of the money if any will be also used in missionary work .As I have an ambitious. plan for Lord .The interested Persons can send their money in the  – SBI Guwahati SWIFT Code SBININ BB 159  Basar Branch SBI Code No.- 6032 in Account No. 11877839037  of Adv.Togo Basar. The donators will be given due receipt if necessary and the foreign dona-tors are accepted to send help as gift  for convenience  of  me.Praise the Lord may God bless you.
Posted by Togo Basar at 2:45 PM No comments:

BABA RAMDEVJI WE ARE TRUELLY SORRY:-

WE ARE REALLY SORRY FOR BABA RAMDEV INCIDENT 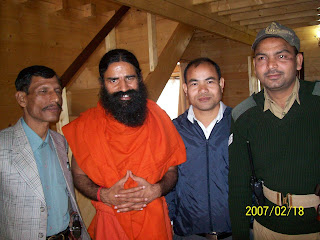 Posted by Togo Basar at 2:35 PM No comments:

THE ADVENT OF REGIONAL PARTY MOVEMENT IN NORTH EAST

All the Party have been tested in the North east , say it Congress or BJP and have been found unwanted . So a sincere exploration is being made of the regional party by our great Leaders like Hon’ble Chief Minister Nagaland Neipho Rioji , HCM Sikim Sri P.k Chamlingji , sri P.A Sangmaji of the Nationalist Congress party , Sri P.K Mahantaji and Patwariji of AGP, Sri Joram Thangaji of Mizo National Front and Sri Kamin Ringuji of PPA .So in this context they met in Delhi on 20th deb. 2011 and after thread bear discussion come to conclusion that only regional Party has scope in NE and leaders made many historical decision for the growth of the regional Party in North East .
And all in principal accepted to form a North East Democratic front with its Hq. At Gauhati to be opened on 18th march 2011. Sri P.A Sangma have been made as interim convenor till a permanent is made. Sangmaji also promised to talk to his Party workers in the view of demand for forming regional party in his home place also it is heard . As for the Nationalist congress Party in other state it is pertinent to mention that , they are already demanding the permission to amalgamate with the regional party in their locality according to an insider . The new demands in the changing circumstance and the corruption allegation of Sharad powerji in Lavasa Projects and Onion price fluctuating etc. may be also making seniour leader to think something different as like earlier case Madam soniajis position is not as strong as Publics have strong doubt about Congress stand in Swiss bank scam case . Thus today regional party can make direct confrontation with the Congress party which is only party worth mentioning in N.E as of now .
As the Central party more specifically congress has looted the North east ; even Sangmaji seems to be toeing the idea that none can trust congress party ; which as critics says may be waiting for the old and sick leaders of its alliance partners to phase out . And recently after all the blame of corruption put on alliance partner ; the coalition partners have all the reason to fear them , as to some critics even the 1st batch of the Black money list in the Swiss bank may be shown of their alliance partner . As a month back mischievously laughing Pranab Mukherjee was seen to be telling some business man names , as if secret deal in 10 Janpath assure him Prime Minister post if he does what they say . The Congress which always win by media blitkriez may be unable to witstand the sustain attack from social network like blogs , e mail ,
movile , face book and twitters which has come up in a big way in world . Last time Hon'ble union minister Jai Ram Ramesh was seen carrying a bag inside the Parliament house just before his promotion . This are the scenes which are not going unnoticed in todays time .
So far BJP have been not tested in North east as much as congress Party , and barring in Assam we have no direct confrontation with the BJP or Bharat Swabhiman Party ; therefore they should like to have coalition with us also , as today is a coalition era and also for another 10 years they will like to have a formidable ally in this region where they have less presence after all they will also not like to miss the bus like they did in Assam . In this context I appeal to my good friend Tarun Vijay Spokesman BJP and Baba Ramdev who is planning Bharat Swabhiman party to consider an alliance with the seniour leaders of NEDF .The People First motto can only be practised in letter and spirit by the regional party of the North east more so in the A.P .After all the regional feeling alone can bring love for the region which alone can counter corruption and nepotism to a great extent .
The well educated and qualified regional leaders due to their national and international connections may also help the Investors who have been facing tremendous problem in North east. As the regional Party alone has the moral right to negotiate on behalf of the regions peoples, henceforth the corporate houses working in NE is accepted to be really tactful. To a critics who opined that- joining PPA by the present Govt. alone will clean their image to some extent as in this Platform alone they can show their repentace by blaming the centre for earlier misdeed . but unless we are really sure of their changed character ,` Yeh Baat Kuch Hajam Nahin Huin from our PPA side this is the reply.
Posted by Togo Basar at 2:32 PM No comments: