A TRIBUTE TO A GREAT FATHER:- 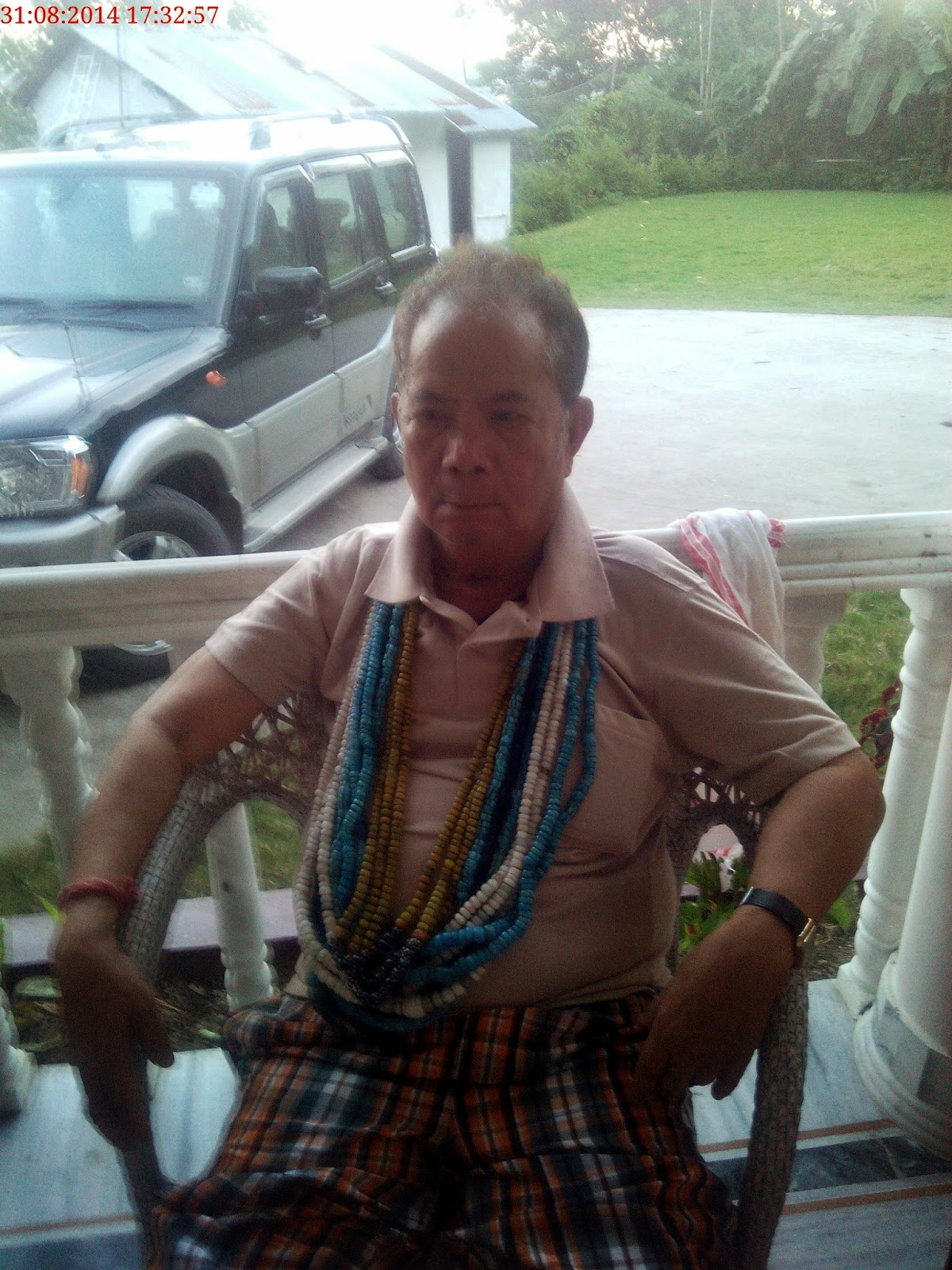 My father late Dakto Basarji who left for heavenly abode on 15.11.2014 was a great man; as in spite of doing an elementary education he did so much for the society of the Basar area of West Siang Dist. Arunachal Pradesh India.That even the contemporary leader will be shy of seeing his performance which he did as a commoner.
And this is a honest fact in this part of the world where the Peoples are in the worst transition period and looking after their own bread and butter.And the kind of message that poured in the mobile and the social network proved his popularity.It is pertinent to mention that the Arunachal Pradesh which is in the North east part of India is lying in a sensitive border area with China.
And time and again the China have been claiming this Arunachal Pradesh  as part of China.Yet many are unaware of problem faced by the Denizens of this place.And what really needed here is world`s sympathy as here the class between the rich and poor is increasing like anything.
And in this backdrop lots of local Good Samaritans like my father is needed.As whatever he did he did of his own without taking help of the power and position.The list of Late Dakto Basarjis personal contribution to the Basar town in particular and State of Arunachal Pradesh of North East India in general is worth pndering.In a time when the Itanagar was virtually  in jungle and the policy decision of the State was decided by the Siang Dist. Publics he did just what it was needed then.
He was born some eighty yrs. ago as eldest son to his father late Kardak Basar of the Gori Village.The family geneology of my father is –Ato/forefather Tani Nito,Nito,Topo,Pone,Neur,Urchi,Chikar,karko,Kore,Rihar,Hara,Aka,Kangu,Nguchi,Chimar,Marsen, Hengo( Elephant hunter),Gomar,Marli,Likar,Kardak and Dakto Basar.Interestingly as critics claimed their was really seen manifest blessing of  benevolent and malevolent gods and godess upon the family during my fathers time.
As in family pooja and ceremony the rainfall was really seen as some Publics here claimed that the family was blessed by the god –Buru Kale which seems to be short of Indra Devta mythological god of Hindu.Interestingly I remember the family priest Late Tage Angu of the Gori-III village once claimed that grandfather Ato Hengos curse of hunting the elephant was cleansed by my father by organizing a large Peka Uyu sacrifice.And he was claiming after that my father gained name and fame.
He seems to have seen education as only means to change the society for good.And thus in the educational field he not only educated all his progenies but He was instrumental in setting up of the Gori M.E School ,Gori football field and played lead role in the construction of the Gori-I Dere being the ASM of  the united Gori and Soi Village.Being the Bazar Secy. Of the Basar Bazar he was instrumental in making of the Old Market Bazar School.
And later played pivotal land in saving it from the land encroacher`s. And some critics even claim that he convinced his Marli Aao family to cooperate the Govt. when some prominent Publics of the Basar area gave the Lower town area land for construction of the Govt.H.S.School Basar which brought up many great persons of the Basar area.
The great man always influenced his friends and relatives around him.We remember that there was a time that our house use to be the cultural and social meeting point.And surely great singer like Moge Doji,Director Higher education Tejum Paduji and Er,Markar Bam ( S.E PWD) etc.will accept this.
And my father  even in odds he never buckled under pressure.This we show when our house was ones burn in fire and when his party lost election in PPA days .But he seems to have been very possessive of his childrens specially me as critics claim I greatly reflect him.
In the Socio Economic front  He being the fighter for the justice and equality he was pioneer in the objection against the evacuation of the Soi Village.And for it as the compromise formula present Staaf canteen area is said to have taken birth in Basar area.Yet having vision of the future he was the only one to support the Leut.Governor K.A Raja to open capital in the Basar town.

And today whole local Publics are regreting for loosing this chance of economic boom.My father played a major role in starting the Old market /Basar Bazar with his few friends and never took any allotment from the Govt. land also.And great man like Sri Boken Eteji also credit him for setting up of the Staaf canteen market in Basar.Thus most of the claims of my father have witness.Thus many Publics of Basar town can see him as its modern founder.
He also played a major role in opening of the NH -52 road from Akajan to Basar in Shiv Mandir area as a contractor as he took one chen = 30 mtr. and completed it successfully for mare Rs.500/- which was also not large amount for the  worst challenging cite he faced.Later he went to Daporijo and established himself as a good contractor.In Basar his construction of two RWD Qtr. Can be still seen in the Gori Complex and one Irrigation channel in the Hiri area near Eshi Chiko Village.
In the political field he fought with Late Tomo Ribaji Ex-Hon`ble C.M hand in hand and was instrumental in making him politically successful. He never played politics for his personal  gain and rather used to be in the losing end for it.Most of the prominent Public leaders in the town seems to have benefitted from his generosity.
Unfortunately the beneficiaries who took land from him  at peanuts seldom looked back in his own time of crisis.My father always believed in my leadership and was really shocked when I was betrayed by close one in my last bid for MLA post from the 29th Basar ( ST) Assembly constituency.
And it seems to effected his health once and for all; as I seems to represent his pride and egoism.As perhaps he really wanted to do many things for the society through me and perhaps he himself felt his limitation for less education in his own time.And wanted to compensate himself through the educated sons and daughters.
The present blog of mine,D.T Cable network we run in the Basar town,the famous GRK society in the Basar area is to many way I suppose ,effect of my fathers vision and wishes directly or indirectly.Even what little vote I got in last election. Even in our childhood the poor Cow Boys who use to take cow from Silapathar to Daporijo used to mostly sleep in our house.

The generosity of my father was even seen when his last will was read out by my elder sister which was written by my father.And which secret was knowingly eluded from others at his direction when he was alive.The will bestowed a portion of land occupied by his brother Nyajum Basar permanently to him.The greatness of my father was also seen when he was no more so much of crowd was seen in his last rite which truly spoke of his greatness.And so many prayed for his bereaved soul.
My father lived life King size saying and doing what his heart said and thought he was a fearless man and never compromised on his principles.His last right was performed by the grandson Mr.Moli Basar, Mr.Moji Basar,Mr.Joto Basar and Mr. Limi Basar.He always wanted the best for the Society.
Hope his wishes are tried to be imbibed  by the present generation of the Basar area in particular ,the present D.T Shop in Basar is a tribute to a great man and the progenies want to do something more for man of his stature in the future.And in his first death anniversary in 15 Nov.2015 want all to visit in the Old Market Basar town to get his divine blessings.For few great man alone make a legacy in this life others make mare living and we are surely proud to be his sibling and for inheriting his gene pool.

Some of the comment of the Peoples on my fathers death:-

1.   A truthful man who never compromised on his principles have died-Adv.Mikar Basar( As verbally communicated)
2.   The great man as he was he left for heavenly abode on the auspicious occasion of the Galo calendar- Z after Diri/less agricultural production time and before Dichi I,e-winter.( This is the message Sri Karyom Riram Rtd.Secy. Govt. of Arunachal Pradesh  read on the funeral ceremony)

Kajum Nyori · Friends with Nyami Riba
One of history one galo people we remember all the time.
·

GoRa Api Bam May his soul rest in peace....

Lendo Lendo May God take care of his soul.

Moi Basar We are bereaved! May his soul rest in peace.·

Bommi Riba He was a man of principle.Honest,courageous and candid.We have lost a pioneer.Achi; you lived an inspiring life!
Deep condolences to bereaved family.May your SOUL rest in peace·
·

Jacy Renthlei · Friends with Arun Chandran
Very sorry to hear about da news a heartful condolence..our prayers will be always der for u n ur family..may his soul rest in peace.Amen
·

Nyoi Nyodu · Friends with Rinku Riba and 7 others
May i pray almighty Donyi -Polo to give peace, courages to our Ato Dakto's departed soul in his heavenly abode.

Kari Riram Taso · Friends with Toni Bam and 14 others
My deep condolence. May his soul rest in peace
Kenga Lombi Lombi · 24 mutual friends
may God help for the eternal peace of his departed soul..

·Ipe Basar · Friends with Marpin Basar and 31 others
Tape, drop me there, come n lets go there... he use to order me whenever he met me as he would never ask me if m busy or have time or not. I'll miss him. RIP.

Minjom Padu · Friends with Takam Sanjoy and 24 others
May his eternal soul rest in peace. At dis hours of distress may almighty gv all family members enough strength & courage. to bear with irrepairable loss.
Tony Pertin Togo, my deepest condolences. It is difficult to fill the void but he will be happy if you follow his teaching. I pray to Almighty for his eternal peace. RIP.

Gonesh Koyu · Friends with Reto Doye and 1 other
Read about it in the papers. A very good and loving person has left us. Regret we could not be there.

Lotu Gadi Condolense..may his departed soul hav the best of evrythin in heaven..

Toko Teki Our deepest condolences.may his soul rest in peace.

·Lemli Loyi May his soul rest in peace ! I remember your dad as a successful and handsome young man in his Wily's Jeep, when he used to come to RKM hostel to visit you, during late 1970s & early 80s period. My condolences to you and your family, my friend!

·Kaling Jerang my dear Togo/ it is unfortunate that i have not been able to be beside you as i am back from koloriang n sarlie. all my thoughts and prayers are with u . may the departed soul of your dad lie in peace. asi kaling

Our prayer :- Oh father let thy soul live in peace without any illness in eternity with the blessing of almighty God and may ever after  live with the soul of our dear mother Late Tumbi Basar
Posted by Togo Basar at 3:33 PM